The increases that individual cryptocurrencies saw during the last 12 months are of course mind-boggling to say the least (Chart 1). The simple average percent price increase through 27 December 2017, for coins and token quoted on 27 December 2016, was 181,111 percent (20,232 percent market cap weighted), that is US$1,000 invested at end-December 2016 in every cryptocurrency would be worth a cool US$1,812,113 today.1 The price increase for Bitcoins, at a measly 1,727 percent over the same period, after it dropped from US$19,997 on 17 December to US$12,617 on 22 December before closing at US$14,535 on 27 December, ranks “only” in terms of price increases 319 out of 552 cryptocurrencies. The share of Bitcoin in total cryptocurrency market capitalisation fell correspondingly from 88 percent at end-2016 to 44 percent today. 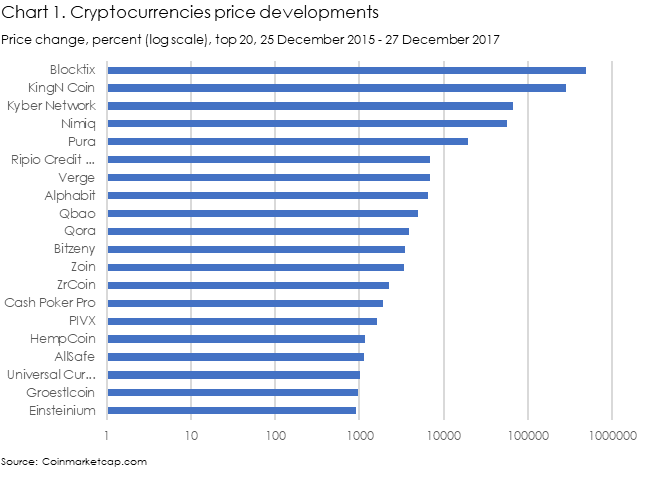 The number of coin and token cryptocurrencies has increased from about 644 at end 2016 to 1376 on 27 December 2017 (Chart 2). Over the same period, total market capitalisation has risen from US$16 billion to US$559 billion. This represents an increase from 0.5 percent at end-2016 of total bank notes and coins in circulation issued by the U.S. Federal Reserve, European Central Bank and Bank of Japan together to 14.5 percent today. 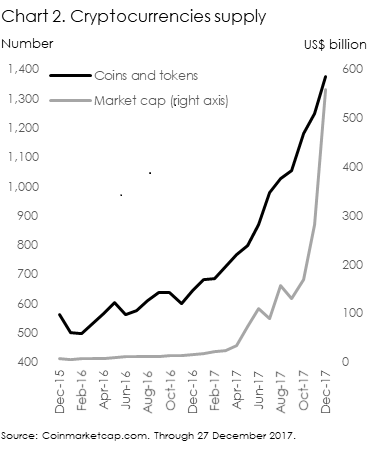 There are of course differences in cryptocurrencies. However, since most cryptocurrencies can replicate existing coins and tokens, that is employing identical or very similar issuance algorithms and technologies like e.g. the blockchain, supply is in theory infinite. Since money is about rarity, the incredible valuations seem at odds with the fundamental value proposition of money. Even though individual cryptocurrencies may indeed be limited in supply, though nothing prevents them from changing that, similar cryptocurrencies can be created at any time. The proliferation of coins and tokens is indicative of the fact that supply is potentially unlimited.

The tulip mania of 1634-37 was puzzling because tulips, as an agricultural commodity, could be reproduced relatively rapidly. Tulips propagate from bulbs and seeds. Bulbs grow to be clones of the parent plant and allow reliable self-propagation. Seeds produce new bulbs but may take several years to bloom. Bulbs may be affected by the tulip mosaic virus that may have a dramatic effect on the colour called breaking of the normally solid colour unaffected tulip. The breaking gave the tulip features deemed highly desirable. Bulbs affected by the virus, though not seeds, can be propagated though their productive rate falls over time. The tulip mania centred mostly around bulbs affected by the tulip virus but also common bulbs saw considerable price increases even though only at the later stage of the mania.2

Cryptocurrencies are mere common tulip bulbs. They are not like gold or other commodity based currencies, though some cryptocurrencies are similarly designed, where supply is strictly externally determined and limited by natural occurrence or extraction possibilities. The price increases cannot be explained unless the different cryptocurrencies represent some unique and non-replicable properties. They do generally not. Some seem to benefit from brand recognition like Bitcoin, Ethereum or Ripple, but their relatively short track record and common technological features do not seem to offer sufficient differentiation.

1 All data from coinmarketcap.com except Bitcoin historical spot prices from coindesk.com.